Apparently, the US authorities gave impetus to the start of a global confrontation between crypto companies and digital currency mixers. The Ethermine miner and the Uniswap exchange joined the pressure on the disgraced services.

Various companies that previously cooperated with such platforms without a twinge of conscience, like Tornado Cash and Aztec Connect are now disconnecting from them. Every week there are reports of new bans and restrictions related to cryptocurrency mixers.

Last Saturday, August, analyst takenstheorem (nickname on Twitter) discovered that the largest Ethereum miner is no longer producing blocks containing Tornado Cash transactions. The Ethermine company has not spoken publicly on the topic of cracking down on crypto mixers. However, such changes indicate that the miner decided not to oppose American sanctions.

It is worth noting that other experts also rechecked the information. They all confirmed the words takentheorem. In addition, it turned out that the last time Ethermine created a block containing the Tornado Cash transaction was on August 9th. In other words, the miner stopped interacting with the known mixers a day after the US authorities imposed sanctions.

The block designated by 15306892, included transaction ETH. These funds were transferred through the Tornado Cash mixer and, apparently, became the last operation using the power of Ethermine.

Decision of the largest miner ETH to stop processing transactions related to the sub-sanctioned service will have far-reaching consequences, analysts say. Over the past few days, Tornado Cash has become a pariah for many crypto companies, but the actions of Ethermine threaten the very principles of the ether. In such a situation, it is difficult to talk about a decentralized, inclusive and open network.

The statements of dissatisfied experts are shared by the creator of Ethereum Vitalik Buterin. He was outraged by suggestions that the validators will be subject to the prohibitive orders of the US authorities after the transition to the Proof-Of-Stake algorithm. The developer stated: validators who are going to comply with sanctions should burn staking ETH. 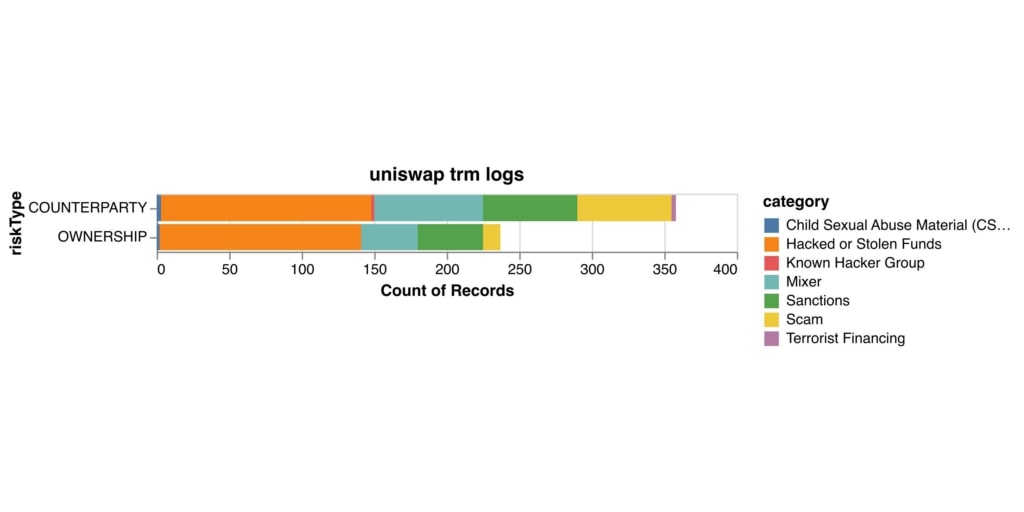 fwiw I voted X in your above poll

Buterin supported the opinion that such actions should be considered as “attacking Ethereum and burning their stake through social consensus” . And while we see many companies willing to bow to the order of the US authorities, censorship opponents also have impressive forces:

Of course, we have named only a small part of the “army” of opponents of sanctions and censorship. In reality, hundreds of prominent industry representatives spoke out against the ban. They have stated that they are not going to censor ETH in any way after the “merger”.

Uniswap blocks 150 addresses due to sanctions and hacks

This week, the Uniswap exchange took its step in the confrontation with mixers . An employee of the platform published data according to which she blocked 253 addresses associated with the theft of digital assets and sanctions restrictions.

Uniswap representatives also spoke about the interim results of cooperation with TRM Labs. For several months, the exchange banned over two hundred addresses. Some of them are related to cases of hacking various platforms and stealing cryptocurrencies. However, it is noteworthy that this list contains many addresses related to mixers.

It should be noted that initially Uniswap blocked not only addresses directly affected by the sanctions, but also wallets indirectly associated with them. Now the policy of the exchange has changed. The ban list includes only addresses that have fallen under the ban of the authorities, or those that are directly involved in criminal schemes.

According to published data, TRM Labs checks wallets for seven points of possible illegal activity. We are talking about the following categories:

Uniswap representatives believe that cooperation with TRM Labs has taken the security of the exchange to a new level. In addition, the analytics company reports allow more accurate identification of addresses associated with cybercrime.

However, many analysts point to the problems that opponents talk about censorship of decentralized platforms. If terrorism, hacker attacks and hacking do not raise questions, then blocking the addresses of Tornado Cash and other mixers will lead to ambiguous consequences.

Recall , earlier we wrote that the Ethermine mining pool refused to support the Ethereum PoW fork.

Results of the day: Tether reduced commercial paper reserves by 58%